The land outside Casa Grande doesn’t look like much now, but in a few years it could be the epicenter of exporting not just for Arizona but also for the West.

At least that’s the vision for PhoenixMart, the long-delayed plan of putting businesses all in one place to pitch products and services to what developers hope will be myriad customers buying their wares. 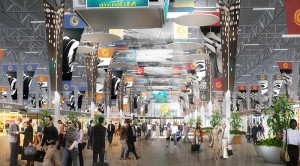 After pushing back its groundbreaking year after year, PhoenixMart is finally pouring concrete and investment into Pinal County. The $250,000 building permit from Casa Grande was paid for in June. It’s putting $5 million into the ground for more than 1,000 footings and the miles of power and technology cabling, as well as water and wastewater pipes. The walls start tilting in late August.

Behind the elegant entrance sign, the land on which PhoenixMart will rise next month resembles a plowed cotton field with a couple of construction trailers and a scattering of portable toilets. The onsite construction activity along State Route 287 east of Interstate 10 doesn’t look like much, but developers say it is just getting started.

At 1.58 million square feet, “this building is the size of six University of Phoenix stadiums,” said Marshall Stahl, president and CEO of PhoenixMart. “You can’t see much from the highway, but we’re finishing our horizontal work.”

It’s a long way from last November, when FBI agents raided the corporate offices of AZ Sourcing amid allegations of improper visa use in getting the project funded. It’s also still battling questions of whether the massive project will ever be built.

Aiming for the world

It’s not there yet, but PhoenixMart is finally starting on the two concepts at work within the project. One is the international exposition center, the other is a mixed-use planned urban center. Total build out for all phases is estimated at $5 billion.
The expo center is modeled after international trade centers in Yiwu International City near Shanghai and Dragon Mart, Dubai International City, in the United Arab Emirates.

“I’ve been to Yiwu,” said Casa Grande Mayor Robert Jackson. “This place is massive. You don’t really understand PhoenixMart until you see something like Yiwu.”

PhoenixMart will have nearly 1,800 manufacturer and retail outlet showrooms under one roof. Its purpose has evolved since its initial announcements, but the expo building still intends to be a brick-and-mortar, one-stop shop for manufacturers.

The 4 million-square-foot facility will be similar to the Merchandise Mart in downtown Chicago, but larger and with more variety. Officials describe it as an exposition of supply-chain vendors that range from automotive to food and beverage to furniture, among others. 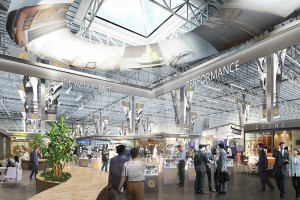 “Instead of looking at computer screens, a buyer from, let’s say a hotel chain, could come here and see the beds, the chairs, the desks all under one roof from a variety of manufacturers,” Stahl said.

AZSourcing Chairwoman Elizabeth Mann said in a 2014 interview she saw opportunities for manufacturers to find partners or vendors. She envisioned PhoenixMart would offer marketing, advertising and logistics support.

Her vision mirrors the offerings at Yiwu, which has a vendor support that serves as back office and marketing for tenants.

“We can see people flying in to Tucson or Phoenix and being bused here to buy things available nowhere else,” he said. “There is nothing to compare it to in North America.”

It’s a potential huge investment in economic development for Casa Grande.
“PhoenixMart itself is only around 100 acres,” Jackson said. “With more than 1,500 vendors, we can see an opportunity to invite those companies to expand into the Casa Grande area. That’s what the rest of the project offers.”

The roughly square mile site will dedicate a substantial chunk to warehouses, distribution centers and business and professional offices. 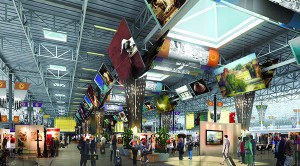 “We expect that with our location near the junctions of I-8 and I-10, companies will want to have product here to be able to get it to buyers as quickly as possible,” Stahl said. “We want to have the same level of services vendors expect from an expo center.”

The Casa Grande mayor said it’s the package that makes the project so important to the city.

“This brings something to Arizona that’s really important in terms of jobs and economic development,” Jackson said. “With the number of people and the scale of development in the total project, that’s a lot of jobs and opportunity for Casa Grande and Pinal County.”

PhoenixMart will have a lot to live up to if it wants to be among the international level of supply centers. For example, Group Four, operators of the Yiwu center in Shanhai, provide total support for vendors and showroom lessees. They locked in a logistics and freight forwarding company to move merchandise around China and into the global trade circuits. It even provides transportation from the Shanghai airport, more than two hours away.

Mann said she envisions the same types of services at PhoenixMart. It’s why logistics centers, flex space, warehousing and distribution centers are planned adjoining the expo.

The success of Yiwu and its isolation — the city itself was built after the marketplace — counters arguments that PhoenixMart is too far from Phoenix Sky Harbor or Tucson international airports, according to those involved with the project. Even the similar-sized Dragon Mart in Dubai is further from air transportation than PhoenixMart, which is 49 miles from Sky Harbor.

“People told my father Edmonton and Mall of America were impossible to succeed,” said Stahl. “I have no doubt that once people see the building rising and finally understand what PhoenixMart means to Arizona, it’s going to succeed. There’s nothing on this continent with which it can be compared.”