CASA GRANDE — PhoenixMart has noted the end of a productive month for the company.

An aerial photo recently taken by AZ Sourcing, the developer of PhoenixMart, documented work that has been done with underground plumbing and electrical circuits. 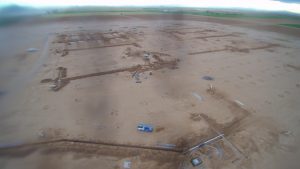 AZ Sourcing claims the company is near completion on this underground utility work and expects more developments to happen in October.

Some next steps in the construction process include the pouring of 50,000-square-foot slab sections, delivery of structural steel components and the erection of the building’s vertical frame.

PhoenixMart aims to have the first two sections of its tilted-wall vertical panels in place by the end of October. Representatives of PhoenixMart have previously stated that the accelerated pace of recent construction has been tied to additional funding supplied by the company’s board members.

Contracts with steel and concrete companies were approved and executed by the company this summer. The productivity comes after the city issued the company a building permit in June.

The PhoenixMart construction site consists of 585 acres near Florence Boulevard and Overfield Road. The complex’s main building is to hold about 1,700 suites, which will presumably be leased out to various wholesalers.

During a recent Casa Grande City Council meeting, a $75,000 contract was approved for Jensen Hughes Inc. to assist the city in reviewing technical drawings of the PhoenixMart building.

It was explained during the Sept. 19 meeting that a significant change had been made to the interior design of PhoenixMart, which relocated the building’s food court area and exposition hall.

Casa Grande Planning and Development Director Paul Tice told the council this type of change could alter the building’s fire code requirements and would require the city to re-evaluate the project’s plans.

The contract with Jensen Hughes helps the city verify that the new designs meet safety standards. Tice said the company is paying its “fair share” in these costs, considering that the company reportedly paid the city at least $250,000 last year to review its building plans.